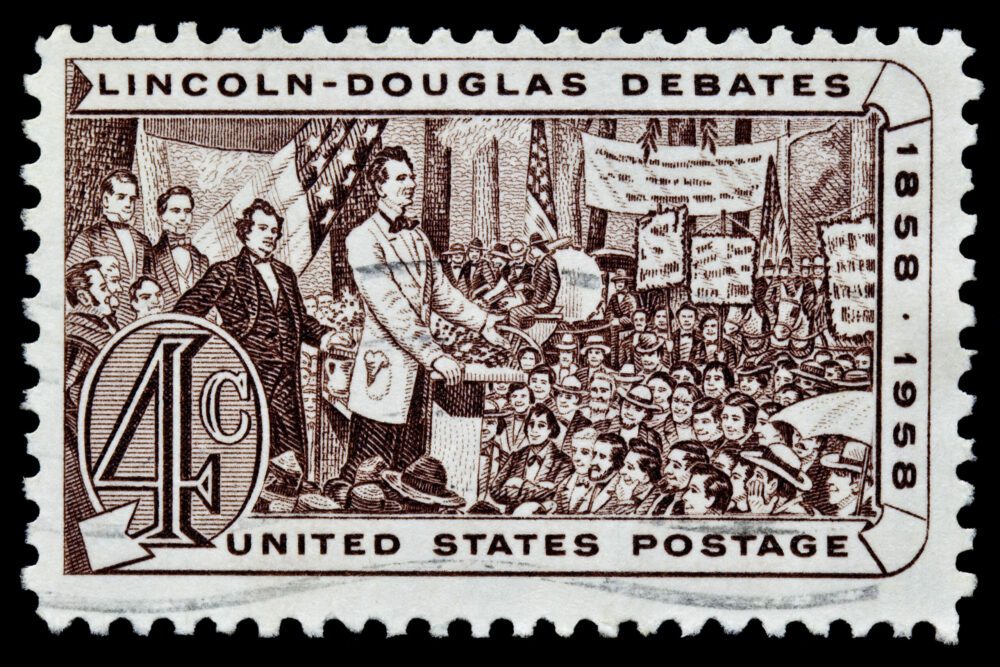 When Sen. Stephen Douglas and Abraham Lincoln faced off in a debate in Peoria, Illinois, in 1854, the issue tearing apart the nation was slavery.

A central issue was whether slavery would be permitted in new territories entering the union.

Douglas’ answer to the question was politics. Lincoln’s answer was morality and the Bible.

Douglas’ answer to slavery in new states, the Kansas-Nebraska Act, was democracy. Citizens would vote to permit or not permit slavery in their state.

Lincoln opposed the expansion of what he saw as the inherently evil institution of slavery.

In the Peoria debate, Lincoln stated, “Judge Douglas interrupted me to say that the principle of the Nebraska bill was very old: that it originated when God made man and placed good and evil before him, allowing him to choose for himself, being responsible for the choice he should make.”

Lincoln’s answer was, “God did not place good and evil before man, telling him to make his choice. On the contrary, he did tell him there was one tree, of the fruit of which he should not eat, on pain of certain death.”

Lincoln argued, essentially, that at the heart of political freedom stands man’s free choice and that the choices man makes have profound importance and consequences.

Now here we are, almost 170 years after Lincoln and Douglas faced off in Peoria, and the nation is at a similar crossroads in another issue of grave moral consequence — our responsibilities to the unborn.

Justice Samuel Alito, in his opinion in the Dobbs decision that overturned Roe v. Wade, argued from a legal, constitutional perspective. His conclusion, contrary to the court’s conclusion in Roe v. Wade, was the U.S. Constitution does not contain a right for a woman to abort her child.

However, the practical, moral result of this decision is that Alito put the nation on the moral footing where Lincoln argued regarding slavery.

The moral consequence of Roe v. Wade was to institutionalize Douglas’ argument that our ultimate American value is choice — not what we choose.

The moral consequence of the Dobbs decision is to secure the notion that where, in the preamble of the U.S. Constitution, it says its aim is to “secure the blessings of liberty,” that what the Constitution protects is our responsibility to make the right choices. Choice is not the ultimate end, but what we choose.

But it’s not over. Now we have clarification that it is not moral relativism that our Constitution secures, but deeper truths of right and wrong.

Now that we know what the Constitution does not do, we will find out what our 50 states will choose to do, meaning where the consciences are of the individual citizens in those states, who will determine these outcomes.

We are in a place eerily similar to what Douglas wanted regarding slavery. Now states will choose yes or no on abortion.

These are the questions before us and that will define who we are as a nation and as a people.

Although in the 1850s the country was deeply divided on the issue of slavery, one would be hard-pressed today to find anyone who would agree with Douglas that democracy and the vote should decide whether slavery would be permitted.

I predict that history will take the same course regarding our increasing awareness regarding the sanctity of life and our responsibility to protect the unborn. But clearly, we are in for the long haul.

When we lose appreciation for the sanctity of life, along with this we lose the sense of sanctity of behavior that brings life to the world. Marriage and sex become no longer responsible expressions of love and creation but expressions of egoism and self-gratification of the moment.